Athletics NI are delighted to launch our new series of Coach Development webinars focused on “The Art & Science of Coaching Running.”

Coach Development Lead, Laura Kerr said: “The current pandemic has encouraged us to look beyond traditional coach development approaches and I am delighted to announce our first Zoom series, which will feature a host of world class coaches, sports scientists and athletes from across the UK, Ireland, Canada and the United States. The webinars, which are now open for free registration, will feature experts who are truly immersed in middle and long distance.”

Kelly Neely and Declan Reed will share their perspectives during the Masters’ Running Webinar led by Colin Griffin whilst Steph Twell, Paul Pollock, Callum and Derek Hawkins will join a panel of Coaches to give their experience of moving up in distances. 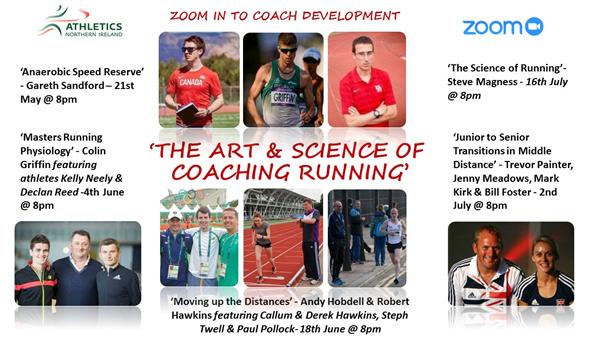 Details of the webinars can be found below:

Dr. Gareth Sandford is a post-doctoral research fellow at the University of British Columbia based in Victoria, BC in collaboration with the Canadian Sport Institute Pacific, Athletics Canada, 94Forward and MITACS Canada. Gareth has been in his current role since January 2019 and joins Canada having completed his PhD on the 'Applications of the anaerobic speed reserve to elite 800m running,' a collaboration between Athletics New Zealand, High Performance Sport New Zealand and AUT University. His role included leading the endurance physiology support for Athletics New Zealand, as well as conducting a 6 ½ months International collaboration travelling 68,000km between 33 high performance track and field centres with Professional, Collegiate and Federation coaches and athletes. Since being in Canada Gareth has provided physiology support on 4 national training camps, including as Physiology lead for the St. Moritz altitude camp prior to the Doha 2019 Athletics World Championships. Gareth will discuss the need for speed in middle distance running and the key determinants of performance.

Colin Griffin is based at the Sports Surgery Clinic Dublin Running and is a Strength & Conditioning Coach and Irish Olympian Race Walker. Colin regularly collaborates with an integrated team to assess running mechanics, injury and improved performance. In this webinar Colin will focus on the physiological and musculoskeletal changes seen in Masters runners, as well as training and nutritional considerations for masters athletes. 2018 Double World Masters Champion (800/1500m) Kelly Nelly and 2018 NI & Ulster Cross Country Champion Declan Reed will share the personal approaches that have allowed them to enjoy both longevity and success.

Criminal lawyer and endurance coach Andy Hobdell has coached athletes to the last three Olympics including Northern Ireland’s top two all-time marathoners, Kevin Seaward and Paul Pollock. Andy also coached 3:49 miler and 13:20 5000m Olympian Andy Baddely. Andy will be joined by Robert Hawkins, coach and father to Olympians, Callum and Derek. Hobdell and Hawkins will answer questions on how they have adapted training and progressed athletes as they move through a range of different events: 800m &1500m, 5k &10k through to Marathon. The coaches will discuss weekly, monthly and annual progression of miles to accompany a move up in distance and their approach to S&C, nutrition, recovery and competing.  Local Olympian, Paul Pollock, will add an athlete’s perspective alongside Steph Twell, who achieved a European bronze in the 5k and recently qualified for the Olympic Marathon and brothers, Callum and Derek Hawkins who both moved to the marathon distance at the relatively young age of 23.

Trevor Painter, British Athletics Pathway Coaching Lead, and husband and coach to World & European Medallist- Jenny Meadows, is responsible for the identification and development of junior athletes who have the potential to progress into successful senior medallists at the Olympic & Paralympic Games. Trevor will be joined by his wife Jenny, local Coach Mark Kirk and Loughborough Women’s Endurance Coach, Bill Foster, to discuss the transition of promising junior athletes to successful seniors. Amongst others, Mark Kirk has coached daughter, Katie to two Commonwealth Games; son, Conall to European Indoors and James Hamilton to the World Para Championships. As an athlete, Bill Foster ran 3:44 for 1500m, 63:50 for Half Marathon and 2:15.49 for the Marathon and at Loughborough University, he coaches Grace Carson who, during her first year with him achieved the U20 NI record for 3000m with 9:31.6.

Steve Magness, now the Head Cross Country Coach at University of Houston; was previously assistant coach at the Nike Oregon project before moving on in 2012. Magness had been a promising athlete, posting one of the fastest US high school times for the mile (4:01). He spent 18 months as Alberto Salazar's assistant coach, leaving just before London 2012 to bring his suspicions on the integrity of the project to the United States Anti-Doping Agency (USADA.)  Magness has gained international acclaim as author of “The Science of Running” and co-author of “The Passion Paradox” & “Peak Performance” His podcast “On Running” is one of the best known in athletics. Steve will discuss his background, approach to developing university athletes, work with Ireland’s Mark English and where he sees the future of middle distance and endurance running.

This series aims to blend the science and art of coaching running and we look forward to bringing together these unique and diverse speakers for the benefit of coaches in Northern Ireland. Laura Kerr said: “Our weekly Youth Academy Zoom series, which has run over the past month for teenage athletes, has seen strong engagement and demonstrated the strength of new approaches to technology in learning and we hope the running community will take up the opportunity to join us on this Zoom Series. In the coming weeks I also look forward to launching an additional Zoom Series for Coaches in the Speed & Power Events.”

Jackie Newton, Director of Coach and Athlete Development added: “During this challenging time we understand coaches will be impacted by fewer opportunities to engage with their athletes, network with each other and attend development events and qualifications. I hope this series will provide an opportunity for a number of local coaches to come together every other week to benefit from the experience of others, ask questions and reflect on their own coaching practice. I would encourage local coaches to register early as each webinar will be capped at 85 participants and with such a world class line up available free of charge I expect interest from further afield.”