Dave Hangs Up The Mike

The name Dave McKibbin is probably one which is unknown to many in the Northern Ireland athletics community, but for those involved in running road or cross country at any level for the past four decades his presence has been unmissable.

Quite simply Dave McKibbin has been the Voice of Distance Running and his commentary on the sport has informed spectators and athletes alike whether it be at the Flahavan’s Primary Schools Cross Country or the Major Internationals at Antrim and Billy Neill; at a small 5k in the country or at the finish of the Belfast City Marathon.

For race organisers one of the first tasks was to check the ability of Dave on race day. To the uninitiated it may seem that Dave was reading from a script handed to him by said race organiser but this was not the case. Hours of painstaking research on the palmaris of the main contenders, whether it be finishing third in the U13 800m or representing Ireland at the Olympics, was handwritten onto his programme notes to be called upon on race day. Even then the task was often made a challenge as the list of entrants was presented with bib numbers in random order and the relevant athlete had to be found in a split second before he or she was past.

An ex-Instonian, Dave was a lifelong member of the original County Antrim Harriers based at Balmoral. As an athlete he was a formidable opponent on the road, country and the track and he was a valued committee member and Secretary of the famous outfit. His contribution to the sport and the respect with which he was held saw him become a Life Member of Athletics NI and he was proud to wear the Chain of Office of Presidency from 2004 to 2006. During his time in Office, he would regularly commentate on a race and then don the chain to present the prizes.

“David is a fountain of knowledge in his command of statistics, and awareness about local and international activity, and for many years he has also been a regular reporting on athletics for the News Letter”, current ANI President Gerry Carson recalled. 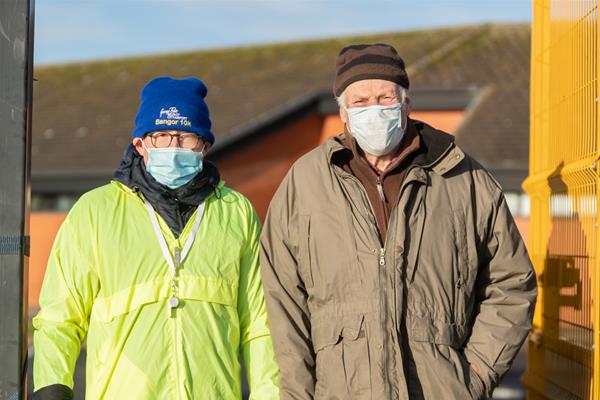 Unlike the announcer at track events, the road and country exponent does not enjoy the luxury of covered accommodation and after 42 years  of rain, hail and snow – and  the occasional sunburn- Dave has finally decided to call it a day. The whole athletics family will no doubt wish him well in his ‘retirement’ and hope that he will enjoy the luxury of being a spectator for many years to come.