It was an exciting day in Dublin with thousands in attendance for the SPAR European Cross Country Championships on Sunday 12th December.

Local athletes lived up to the home support, with stellar performances, resulting in Ireland finishing 3rd in the points table, just behind Team GB and France.

One of the highlight performances of the day was of course, the U20 Men’s Silver, with NI’s Nick Griggs (Mid Ulster AC/ Coach: Mark Kirk) finishing in 16th place. The team of Abdel Laadjel (6th); Dean Casey (13th); Scott Fagan (21st); Sean Kay (50th) and Cathal O’Reilly (77th) produced a superb performance, with the first three athletes all inside the Top 20, finishing only a single point off the gold medal.

“It just wasn’t my day and I’ve no excuses. I had to dig in deep there and kept fighting to the end. I wasn’t going to give up as the crowd support was fantastic. It was a great learning experience for the future”. 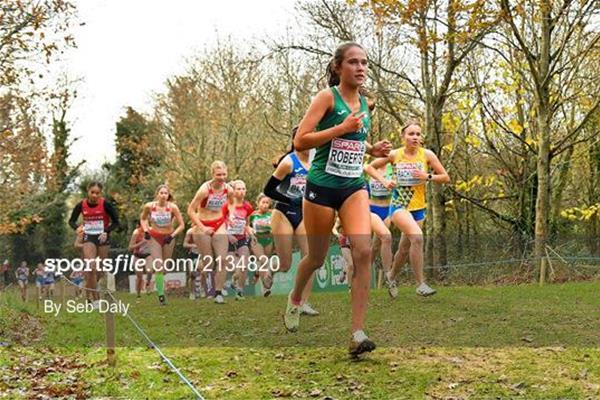 The U20 Women’s team put in a strong performance with 3 athletes securing Top 30 placings, leaving Ireland in 8th place in the final team standings.

UCD AC and Youth Academy athlete, Aoife McGreevy (Coach: Mark Kirk) was the first over the line for Team Ireland in 23rd place, with Emma McEvoy in 24th place, both finishing in 14.07, just 3 seconds outside of the Top 20. Loughview AC’s Rebecca Rossiter (Coach: Andrew Han) and North Belfast Harriers’ Roise Roberts (Coach: Jim McGuinness) were supported up the home straight by the crowd, to both finish under 15 minutes, with Rebecca in 38th place in 14:22 and Roise in 77th place in 14:54. Irish team mates, Jane Buckley finished in 30th place in 14:15 and Laura Mooney finished in 55th place in 14:36.

The Senior Mixed Relay team just missed out on the medals, with World Championship Track Finalist, Ciara Mageean (Team New Balance/ Coach: Steve Vernon) putting on a stirring display in the first leg to give a useful 3 second lead to team mate Luke McCann in the second leg. Ireland’s Siofra Cleirigh Buttner took the 3rd leg and Andrew Coscoran took the final leg, to finish in 4th place overall, in 18:06 behind Belgium.

As expected, Norwegian Olympian, Jakob Ingebrigsten toyed with the opposition in the Senior event to win easily by some 14 secs. Ireland’s Brian Fay was 10th with Tonosa Haso 13th. Newcastle & District AC’s Ryan Forsyth (Coach: Richard Rodgers) finished in 58th place overall in a time of 32:58.

Full results can be found here