The International Cross Country was held in conjunction with the NI & Ulster Even Age Group Championships and the Bobby Rea Cross Country which saw over 1500 athletes take to the start line across all age groups, from U10s through to Masters.

The athletes had to contend with a hilly course, and despite the heavy overnight rain, conditions did not adversely affect the World Class Ethiopian athletes who were always well to the fore in both the Men’s 8K and Women’s 6k events.

In the Men’s race Ethiopia’s Gizelaw Ayana wasted little time in asserting his authority over the rest of the field. At the end of the first lap he had established a 30m lead over a group of some 10 athletes which included all the top NI contenders including the NI & Ulster Team of Eskander Turki (Annadale Striders); Craig McMeechan (North Down AC); John Craig (Annadale Striders) and Gary Crummy (Newry AC) along with Mid Ulster AC’s Nick Griggs and North Belfast Harriers’ Finn McNally.

19 year old Ayana had already proved his classy credentials 3 weeks earlier when he finished 2nd in Cardiff’s World U20 Half Marathon in a classy time of 60 mins 17 secs. He was no stranger to cross country however, having competed in the Cardiff Cross Challenge the weekend before, finishing 2nd in the U20 Men’s event in 26:39. The conditions underfoot proved no obstacle on Saturday, as Ayana  crossed the line for a 12 secs victory margin.

There was however a concentrated battle for the chasing places with Griggs, Turki and McNally finally breaking away from the remainder of the field. 17 year old Griggs produced an impressive acceleration of pace in the final lap where he made substantial inroads into Ayana’s lead, finishing in 2nd place, also taking the Men’s U20 Championship title in a time of 25:36.

Eskander Turki fought grimly to hold on to 3rd spot in 25:42, only 3 secs ahead of an excellent run by Finn McNally finishing in 25:45. Craig McMeechan was 21 secs behind in 26:06, with Gary Crummy and John Craig completing the top seven in a time of 26:10 and 26:18 respectively.

Winner Ayana explained through interpreter Turki who is also of Ethiopian origin, that he thought he had a good run and was very happy with the result.

The highly talented Griggs who ran a 3 min 56 secs mile earlier this year said: “I was pleased with that especially as I’ve never run cross country before over 8k. I sat with the other guys for two laps and then thought I’ll give it a go as I felt fresh. Maybe I would have got closer to the winner if I’d gone earlier. I’m definitely going for the Euro Cross in Turin in December though I don’t do a lot of cross country. My main aim next summer is the European’s in Romania“ . 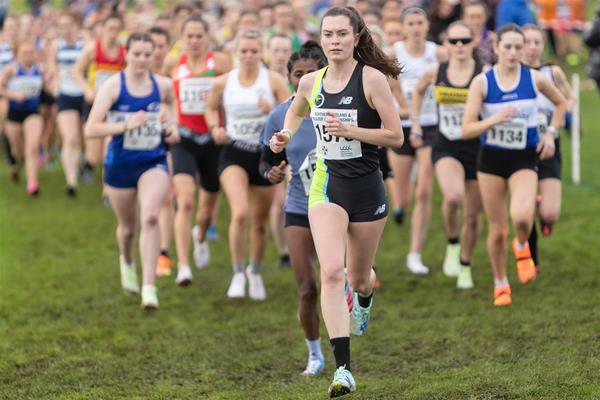 In the Women’s event World University Cross Country champion Izzy Fry made valiant efforts to stay in contention with Ethiopian pair Medina EIsa Kumanda and Melknat Wudu Sharew. After 2 laps the Ethiopian duo were some 20m ahead of Fry but the gap increased substantially from there to the finish. In a sprint finish to the line Kumanda just got the verdict over Sharew both with the same time of 21 mins and 7 seconds.

Afterwards Izzy commented: “The Ethiopians went out hard from the start and I suffered a bit as I went with them, however I recovered a bit later on. As well as cross country I also race indoors and also on the track. I’m aiming to gain GB selection for the Euro Cross Country soon at the trials in Liverpool. I was 9th in the U23 race last year. I’m with a very good training squad in Manchester under the guidance of Helen Clitheroe which includes Ciara Mageean.”

4th placer Jodie McCann said she was very pleased with her performance and hoped to gain Irish selection again for the Euros where she has competed every year since 2016.

The NI & Ulster Championship events brought athletes from across the 9 counties to compete for the Club, County and Individual Championship titles and Qualification through to the All Ireland Championships on 20th November in Donegal.

The U20 Men’s event, held alongside the Senior Men’s International, saw Nick Griggs (Mid Ulster AC) claim the title in 25:36, with 2nd and 3rd places going to CNDR Track Club’s Callum Morgan in 26:27 and North Belfast Harriers’ Matthew Lavery in 27:04.

City of Derry Spartan’s Seamus Robinson took the U18 title in 16:45, with Loughview AC’s Kyle Thompson in 2nd (17:11) and St Malachy’s AC’s Finn Diver in 3rd (17:37). The overall club title went to Monaghan Phoenix with 66 points, with Antrim winning the County title with 51 points overall. In a hotly contested race for the U18 girls, East Down AC’s Anna Gardiner claimed the title in 15:20, with Willowfield Harrier’s Lucy Foster in 2nd place (15:27), leading her club to the team title with 45 points overall and Enniskillen AC’s Annabel Morrison in 3rd (15:34). The County title was won by Co Down with a total of 45 points overall.

Emer McKee (Willowfield Harriers) won the U16 Girls title, in a time of 11:42, followed by Lagan Valley AC duo of Olivia Morgan in 2nd place (12:14) and Grace Bennett in 3rd (12:14), leading the club to the Championship title. The County title went to Antrim with 35 points. Cranford AC’s Caolan McFadden won the U16 Boys Championship title in 10:34, with Mallusk Harriers’ Tom Fleming in 2nd place in 10:49 and Letterkenny AC’s Mark Galvin in 3rd place in 10:50. The Finn Valley AC boys won the Club title with 77 points overall and Donegal won the county title with 65 points.

Lagan Valley AC’s Rory Armstrong won the U14 Boys race in a time of 8:05, followed by Ballymena & Antrim AC’s Evan Tosh in 2nd place in 8:09 and Letterkenny AC’s Daragh Naughton in 8:14 to take 3rd place. The Club title was won by the Lagan Valley AC team with 102 points overall, with Antrim winning the County award with 57 points. Shercock AC’s Abby Smith won the U14 Girls in 8:44 with Loughview AC’s Olivia McCusker in 2nd place in 8:46 and City of Lisburn AC’s Madison Welby in 3rd place in 8:49. The club championship was won by Finn Valley Ac with 36 points and Donegal won the County event with 64 points.

Cranford AC’s Oisin McBride won the U12 Boys Championship in a time of 4:29, leading County Donegal to the Championship title with a total of 33 points. In 2nd place was Flahavan’s Squad member and North Down AC’s Carter Robinson in 4:31, followed by Olympian Youth & Ac’s Dylan Curley in 3rd place in 4:23. The Club title went to Finn Valley AC with 62 points overall. Another of the Flahavan’s Endurance Squad members, Kate Kelly of Enniskillen RC won the U12 Girls Championship in a time of 4:37, followed by Finn Valley AC’s Darci Clarke in 4:37, leading her club Finn Valley Ac to the club title with 44 points, and Donegal to the county title with 63 points. Carrick Aces AC’s Aine Smith placed 3rd in a time of 4:39.

Athletes from the U12-U18 Championships qualify to the All Ireland Even Age Group Championships, with the top 12 representing Ulster, the Top 4 Club teams and the Top 3 County Teams competing against their regional counter parts. The entry link of the NI & Ulster Qualifiers will be available soon.