Our NI and Ulster athletes were in action this weekend at the AAI Games in Santry; the BMC Grand Prix in Watford; the World Combined Events Challenge in Arona, Spain and at their local tracks in Antrim and Belfast as well as at the Cairncastle Classic Fell Race.

The AAI Games served a number of impressive performances from both senior and junior athletes across the two-day event at the Morton Stadium. Eilish Flanagan (Carmen Runners AC/ Adam State Uni/ Coach: Damon Martin) set a new Irish and Northern Irish 2000m Steeplechase record with a time of 6:13.50 at this weekend’s AAI Games in Santry, moving her to 22nd on the World All Time list. Olympian, Kerry O’Flaherty (Newcastle & District AC/ Coach: Richard Rodgers) finished in 2nd place in a time of 6:35.65.

All the results from the AAI Games and Combined Event Championships are available here: https://www.athleticsireland.ie/competition/results/ 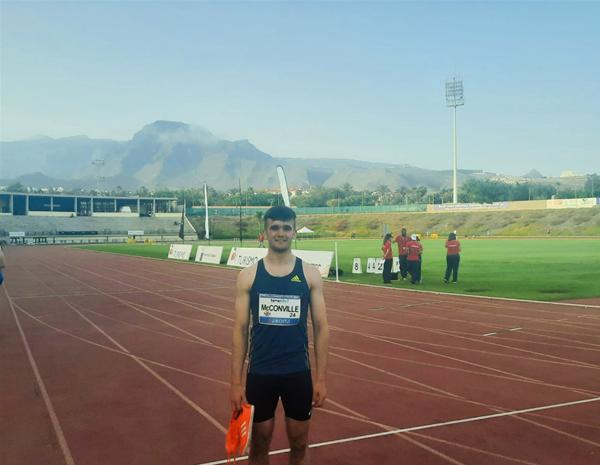 Dundalk St Gerard AC’s Kate O’Connor set a new PB in the Women’s Shot Put event with a throw of 14.54m, before clearing 1.73m in the High Jump and finishing the 200m in a time of 26.44. Unfortunately, Kate gained an injury in the 100m Hurdles, which she finished in 14.24, and had to withdraw after day 1’s events.

2018 Commonwealth Games athlete, Adam Kirk-Smith (Derry Track Club) returned to the track at the Armagh AC Hurdles and Steeplechase Meet at the Mary Peters Track on Sunday 13th June, competing in the Men’s 3000m Steeplechase, where he finished in 9:34.43.

On Saturday 12th June 2021, East Coast Athletic Club invited Northern Ireland’s fell running community to Ballygally, for the 2nd annual running of the Cairncastle Classic Fell Race.  The event was Race 1 of the NIMRA 2021 Championship, with approximately 2200ft of elevation over the 10 mile course.

From Cairncastle Primary School, athletes raced uphill on the road, before joining the fells for the ascent of Knockdhu. In the battle for the men’s title, it was 2019 winner Timmy Johnston (Mourne Runners), Allan Bogle (City of Derry AC) and Larne man Ryan Stewart (Scottish Dental Runners) who led the field of 150 runners onto the hills.  They were closely followed by Mourne Runners pair Jonny Scott and Adam Cunningham.  Early in the race, Martsje Hell (North Belfast Harriers) had already taken a commanding lead over the female pack, with 2019 race winner Esther Dickson (Newry AC) and Elizabeth Wheeler (Glens Runners) in pursuit.

On the higher slopes of Knockdhu (Checkpoint 1), the gaps began to appear as the athletes raced across the Sallagh Braes, before descending to the valley floor. By Checkpoint 4, Mourne man Timmy Johnston had almost two minutes on Stewart, with Bogle a further one minute behind. Martsje Hell led the ladies into Linford Car Park. At this point, it looked like the race was for 2nd place, with Dickson and Wheeler both moving well, and fifty seconds between the pair.

As the athletes moved onto the final summit of the day (Scawt Hill), positions didn’t change amongst the men. However, in the ladies race, the impressive Glens Runner Elizabeth Wheeler had significantly cut the gap to Esther, with both of them reaching Checkpoint 5 only two seconds apart.   With only the downhill stretch back to the coastal village of Ballygally remaining, the Newry AC lady showed her remarkable descending skills to again extend the distance between the two.