Three weeks after his brilliant racing weekend in Malonno, Lombardy in Northern Italy, with a 3rd in Piz Tri Vertical Kilometre (Saturday) and a 5th in the Fletta Trail (Sunday), Newcastle & District AC’s (and Dromara’s finest) Zak Hanna made the trip back again to Northern Italy.

This time it was for the 32nd Version of the Challenge Stellina in Susa, northwest of Torino (Turin). Along with Sylvain Cachard (France) and Miran Cvet (Slovenia), they were the only non-Italians in the race in this the strangest of years. The race was also the ‘Campionato Italiano Senior di Corsa in Montagna’ or the Italian Mountain Racing Championships.

The font of all knowledge of mountain racing Italian style is ‘corsainmontagna.it’ and their race preview suggested that Cesare Maestri (2nd in the World Mountain Racing Champs) and Francesco Puppi (2nd in the World Long Distance Mountain Racing Champs) would be the ones to beat. Also mentioned were Henri Aymonod (the Italian with a French name), winner of the Piz Tri Vertikal three weeks ago, Alex Baldaccini, winner of the Stellina in 2015 and 2017, the Dematteis twins, Martin and Bernard, former European Champions and Cachard and Hanna.

A two-hour flight on Friday morning, having battled from 3am in the autumnal storm to Dublin, and Hanna landed in Milano Bergamo where the first thing he noticed was that it was sunny and warm. Trains from Milano to Torino and then up the Susa Valley and around 6 hours later he was installed in Susa where it was 29C. With a weekend of unbroken sunshine ahead of him, he reflected on how lucky he was to have a love of the mountains and be able, especially in the middle of this difficult year, to be able to compete like this.

The race itself promised 22C in the shade at start time Sunday - 9:15am. 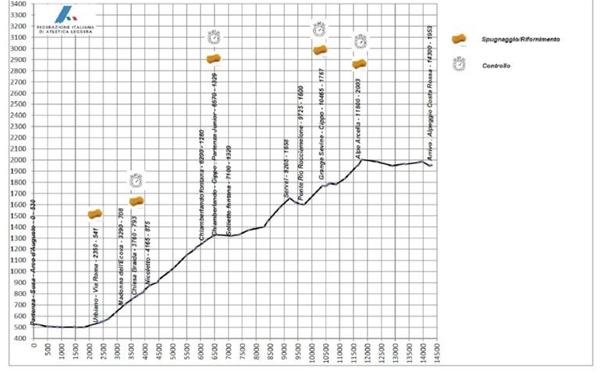 The profile above shows nearly 2k almost flat through the town of Susa before the climb begins and it is steep. With a little respite around 6.5km, the climb between 2km and 11.75km (just under 10km) is 1,500m or just over 4,900 feet or 500 feet more than Ben Nevis or nearly twice (1.75 times) the height of Donard. After all that, there is nearly another 3km where the runners have to find their running legs again. In all 14.3km to a mountain top finish with climbing of 1,630m (5,348 feet) and descent along the way of 210m.

Race day dawned without a cloud in the sky and with the temperature already soaring, Hanna joined the front row of the ‘formula 1’ style grid designed for social distancing wearing his mask. The mask was obligatory for the first 500m. Hanna tucked into the front bunch that was a who’s who of Italian mountain racing. Just in case anyone thinks that mountain racing is only for slouches the first 2km of this race was basically flat through the town of Susa – Hanna covered the first mile in 5:09 and then at 2km the race turned steep. He climbed well, as ever, encountering a difficult patch around the middle and then at about 9.5km he spotted Baldaccini ahead of him, a past winner in 2015 and 2017. 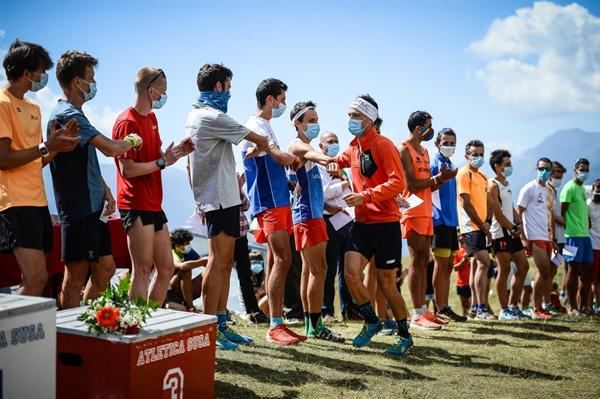 A sign of the times – the podium guard of honour 6,000 feet up for the Italian Champion – Hanna 3rd from left

By now Hanna was in 10th place and with his climbing legs feeling good again set about moving up the field. He caught Baldaccini and kept pushing and onto the final 3k, with false flats and true flats at over 6,000 feet altitude, Hanna surged to cross the line in a brilliant 8th place. In the process he had taken the scalps of not just the former winner of the race Baldaccini but also Puppi, 2nd place in the 2019 World Long-Distance Mountain Racing Championships and Bernard Dematteis former European Mountain Racing Champion.