"Much more than an Olympic Champion. A real jewel of the world": Cliff Morgan. 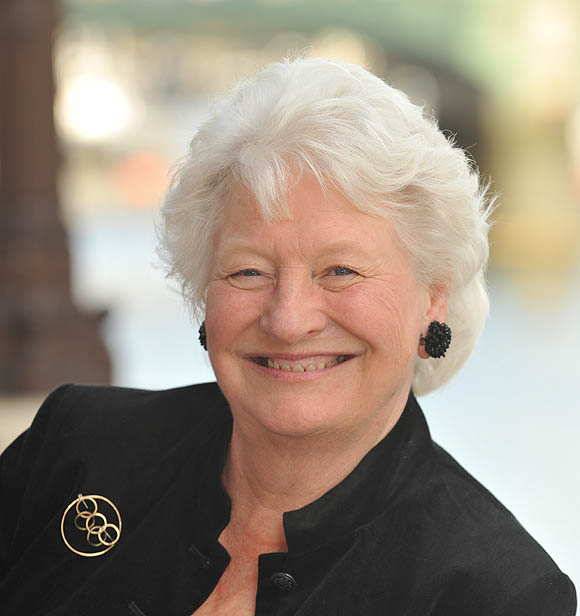 In the 1972 Summer Olympics Peters won the gold medal in the women's pentathlon, having finished 4th in 1964 and 9th in 1968. To win the gold medal, she narrowly beat the local favourite, Heide Rosendahl.

She represented Northern Ireland at every Commonwealth Games between 1958 and 1974. In these games she won 2 gold medals for the pentathlon, plus a gold and silver medal for the shot put.

She was appointed CBE in 1990, having been appointed MBE in 1972. In 2000 she was appointed Dame Commander of the British Empire, the year in which Denise Lewis won gold in the women's multi-discipline event, now the heptathlon. Mary Peters was named as Lady Companion of the Order of the Garter on 27 February 2019. She was installed in St. George's Chapel, the chapel of the Order, on Garter Day, 17 June.

Northern Ireland's premier athletics track, on the outskirts of Belfast, is called the Mary Peters Track in her honour. In April 2009 she became Lord Lieutenant of the City of Belfast.

Britain’s athletes will be able to draw on the experiences of 27 Olympic greats, including five-time gold medallist Sir Steve Redgrave and 2004 double champion Dame Kelly Holmes along with Northern Ireland Dame Mary Peters when they compete in London in 16 months’ time.

They have been brought in by the British Olympic Association to provide moral support for the 550-strong GB team in 2012, 70 per cent of whom are likely to be making their Olympic debuts.

Britain's largest-ever team at an overseas Olympics returned home with only four gold medals. The only gold in the Olympic stadium was achieved by Mary Peters in the pentathlon. The blonde secretary from Belfast put together one of the finest series of performances ever seen by a female British athlete, including clear wins in the shot put and high jump and the run of her life in the 200m at the end of the second and final day of competition to beat local favourite Heide Rosendahl into second place. She scored 4801 points, an improvement of 26 points on the previous world record.

On Day 2, Mary's Long Jump was average and the competition all came down to the last event-the 200m. This was to be Rosendahl's best event. The German girl won it with Mary 4th in a personal best. Mary's point of 4801 to Heide Rosendahl's of 4791 was extremely close. Mary had an agonising wait for the 200m times to come up on the scoreboard to find out if she had done enough.

When the points were calculated Mary knew she had won Gold and also shattered the World Record and the Olympic Record in the process.

Mary moved to Northern Ireland (Ballymena) with her family when she was 11 years old. Northern Ireland has been the home to Mary Peters since she was young. Even today, Mary still lives in Belfast although most of her life she has spent travelling the world, competing and through work.

Mary has been an inspiration to people throughout Northern Ireland, bringing people together in times of trouble, through her sporting triumphs. Mary Peters is a true ambassador for Sport, reaching the pinnacle of sporting effort and achieving the ultimate: an Olympic Gold Medal.